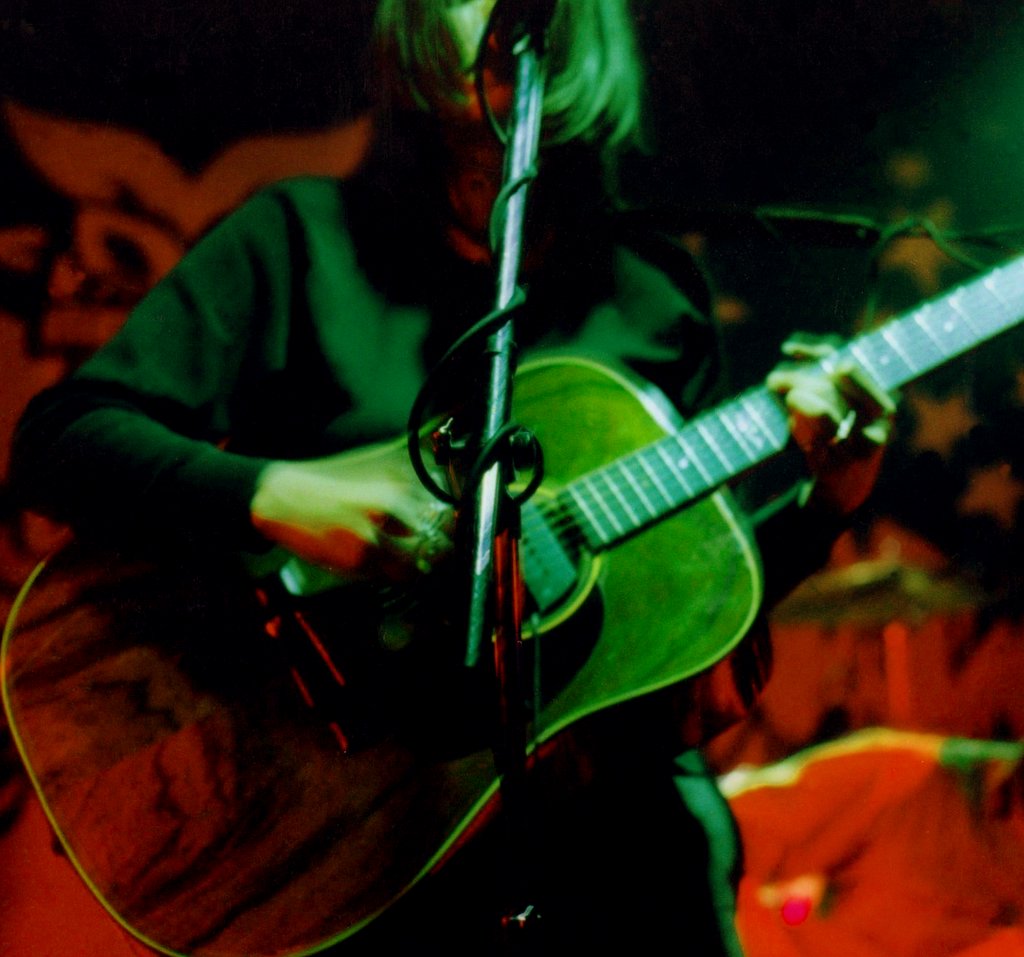 Tara Jane O’Neil was a member of Rodan, one of the most important bands that the early 1990’s produced. Tagged unfairly as the children of Slint, this Louisville, KY band, while exploring the same quiet then loud territory of their predecessors, Rodan was making music that was far more complex and multifaceted. Tara, being the sole female member, added some subtlety to all the over the top male aggression. When she left the band she went on to explore the quieter end of the musical expression in Sonra Pine and Retsin. In her solo work she started using delay pedals to make striking & austere sound-scapes for her vocals and guitar to inhabit. Her music is complex and subtle, stunning in its starkness and beauty. -Dan Cohoon

Dan Cohoon: Let's start at the beginning. Tell me about the history of Rodan. How did you meet those guys? Were you involved in any other projects prior to Rodan?
Tara Jane O’Neil: We met somewhere in the suburbs of Louisville. It was easy to identify like minded folks then. We stuck out like sore thumbs.

DC: Rodan: Rusty was my Led Zeppelin in high school. It was the first CD I listened to when I woke up and the first one I listened to when I got home. Did you have any albums that had a profound effect on you when you were growing up?
TJO: Jefferson Airplane, Joni Mitchell, Prince, Leonard Cohen, local hardcore bands, Joy Division, Velvet Underground, Patti Smith, stuff like that, can’t even remember all the smaller groups.

DC: How were you introduced to underground music?
TJO: I listened to a lot of psychedelic music in high school and this led me to a lifestyle that didn’t quite fit into my parents’ world. Finding shows and loitering teenagers is what saved me. Finding underground stuff on tape or at shows was pretty easy once you got started. There were maybe two venues for stuff like that in Louisville, and then a few house parties. 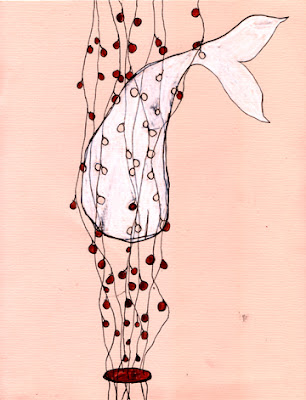 DC: It seems that Jason with the Rachel's and you with your solo work have moved away from extremely aggressive music (although Jason still explores it with RMSN). What do you think led you to explore the mellower end of the sonic palette?
TJO: I've always liked quiet music. I like space and sustain. I like songs and textures. I like fast and loud and jagged stuff. I like music without edges. I like Philip Glass and Laurie Anderson and Brian Eno. I like Yellow Swans and Deerhoof and Merzbow. I play a lot of music that’s harsh and noisy and improvised; that stuff never gets recorded or released. But there is a musical balance happening in my life. I just end up recording and releasing quieter, song based stuff.

DC: How does your solo work differ from the work you did with Retsin and Sonora Pine? Are there any overarching themes in all your work?
TJO: It's all different. Every new record is different. Every band different, I have had a similar sonic vision quest the whole time. Now I'm changing a bit. Can’t wait to see what happens…

DC: How is Portland different from other cities you lived in? What do you like and hate about Stumptown?
TJO: It’s kind of a fusion of other cities I’ve lived in. I can hide out and keep my living pretty cheap, like in Louisville, and I can go see a good movie or art show or music show, or play with some awesome people from time to time, more like New York. There's a bunch of queers out here too, kind of living the life we want to. That’s pretty unusual I think. I like the progressive bubble that Portland is. I like my musical and artistic community. I don’t like the growing homogenization, boutique culture, and rising rent prices.

DC: In your solo work you make use of loops and effect pedals. What is your set-up like? What challenges and opportunities does this set-up provide?
TJO: I use loops as a kind of improvised jam thing. Sometimes I use them for texture within a song, but really it’s like I’m playing something off the cuff with another person. The boomerang I use is more esoteric than scientific and I just have to kind of play with it as it decides how it’s going to play. When I do solo stuff this is a great chance to get loose and pretend that I’m playing with other people. The challenge is that I have to resist the temptation to just do a whole set of loops and forget the songs stuff. Or maybe I don’t. 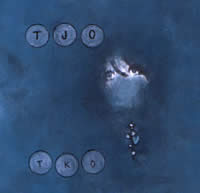 DC: On TKO you moved towards a more electronic exploration. With You Sound, Reflect you moved back to more acoustic-based sound manipulation. What caused you to move back from the more electronic sound?
TJO: TJOTKO was an experiment. It was fun. I used elements of that on the You Sound record, and live arrangements. 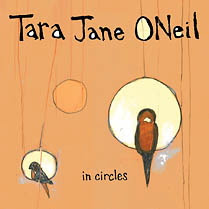 DC: How did your sound evolve from You, Sound, Reflect to In Circles?
TJO: Not sure. I think I wanted to strip things down a bit. I think I did.

DC: You are also a visual artist. Do you have a formal art background? Do you have similar themes in your visual art and your music?
TJO: I’ve been making drawings and paintings since I was a teenager. I didn’t go to school. I illustrated some books of poetry for Cynthia Nelson back when I was a baby. Done a lot of art shows and have one book out and another on the way. [and here is the plug for that, Wings.Strings.Meridians. (a blighted bestiary) comes out November 2007 on Yeti Publishing. It’s 96 color pages of images and there is a 15 song CD included with live looping, discovery demos of your favorite songs and other ephemera]. It’s all coming from the same place, the art and the music. I’m just some kind of processor. Different themes are more suited to visual expression than musical expression. It’s a fine line. 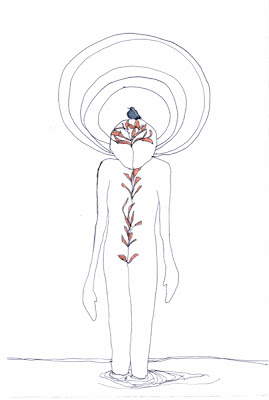 Artwork: TJO
DC: What does the future hold for you? Are you involved in any other projects besides your solo work? TJO: [Doing an] art book, releasing some instrumental music I’ve done for film, finishing some collaborations with friends, starting a good time band, hopefully going out in the spring to do some art and music shows, art show in Istanbul, Japan tour 2008, continuing my career as hired and un-hired gun for friends’ bands. 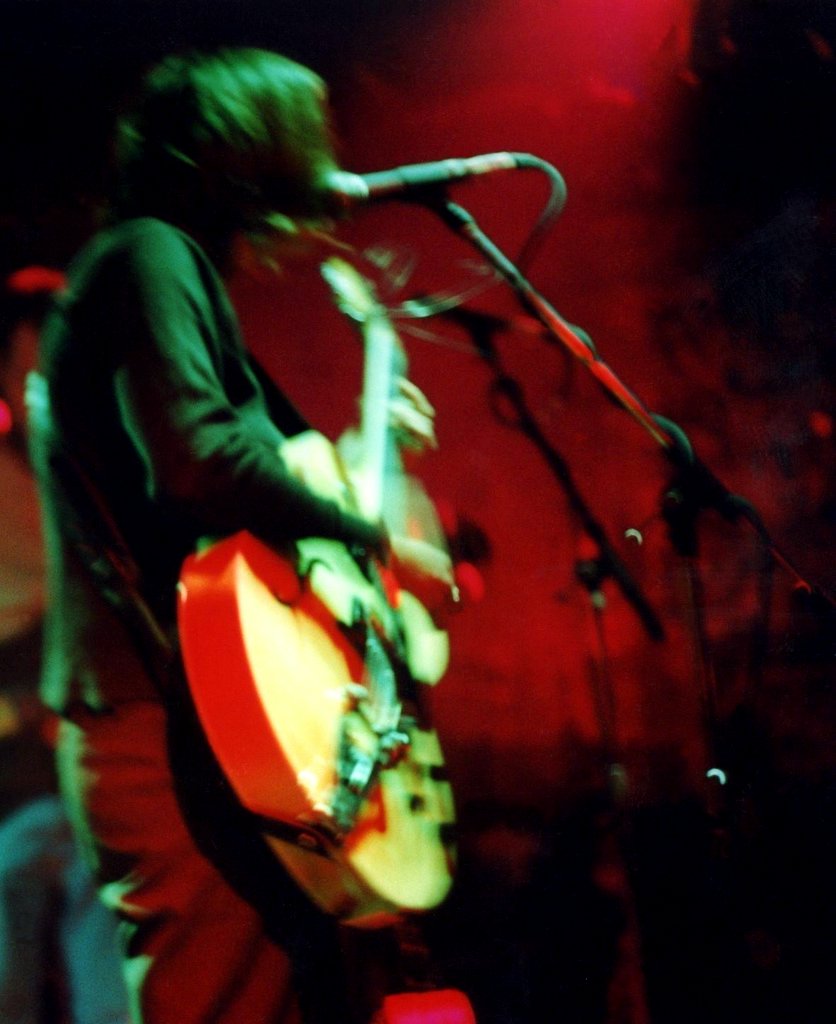 TJO @ Satyricon (2000) Portland, Oregon
photo: Dan Cohoon
DC: One magical night at the Blackbird in Portland, Oregon you serenaded me personally. Do you always pick the biggest dork in the crowd to sing to? It was simultaneously the most amazing thing, and terrifying thing that have ever happened to me.
TJO: Takes a dork to know a dork