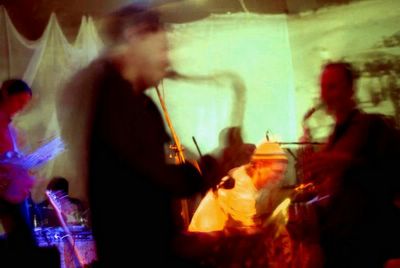 This interview was conducted in 2001
@ the Michigan Avenue Social Club
with Tom Greenwood & Jef Brown.
Interview & photo by: Dan Cohoon

DC: That was recorded in Baltimore mostly?
TG: All of it.

DC: Is there a core of people that allows Jackie-o to exist?
TG: I would say that the core would be myself, Jeff, Barry, Brook, Geves & Jillian.
Jef Brown: John Fleming would be in there to.
TG: Oh yeah he has been in this thing longer than anyone except me.

DC: Your music seems to be very American. You incorporate everything from Folk, Blues, Jazz, Rock and Electronic music. Did you set out to do that or did that just evolve from people's histories?
JB: We kind of can't help it. We are Americans. We live in a society that gets so hung up on doing the new thing and forgetting about the old thing entirely. You listen to a lot of modern music that is being made today, it is so removed from tradition it almost sounds contrived. We never really set out to do it. It is something in our subconscious. We didn't really even know it until the reviews started coming in . . . at least I didn't.
TG: Musically, we never really set out to reflect anything influence wise. I read ads in the paper where people are looking for band members. They have these huge lists of their favorite bands. I can understand wanting to some common ground with people you are playing with. Like if you are really into Burt Bacharach & Liberace you are not going to want to play with some one who is really into Cradle of Filth. For instance with Jef we didn't sit down and say I want this to sound like John Lee Hooker crossed with Pink Floyd. It was just coincidental that when we started touring & bringing out our tapes that we were both into the Dog Faced Hermans & John Coltrane. We really want to document what we all sound like playing together. I would never try and start a band based around what my musical influences is. Just because I like something doesn't mean that I want to copy it.
JB: Sometimes the best music you make is after weeks of not listening to anything. Sometimes you have to do that. Turn your stereo & radio off. Just get away from it.
TG: I think that really freaks out some people. I think some people fall in love with a certain type of music and they want their own music to sound like that. It is really common.
JB: Sometimes you go to someone's house and look at their record collection and they have twenty albums that all sound like themselves.There is nothing wrong with that, it is just not what we are doing.
TG: I think that is the one of the factors that keeps every one interested because we never really know what the next thing is going to sound like. Honestly, I have no idea what our next out put will be.

DC: So the record for Road Cone--is that completed?
TG: Yes.

DC: Is there a general theme?
JB: No, it started being recorded last summer. It was a different band then. There would almost be two records worth of stuff on that thing. There were a couple of pieces that were written out. There were a bunch of short pieces we wanted to do just because we wanted to do some short pieces. I guess that is how it is different is that there is a little more thought put into it than the last one (FIG. 5).

DC: Speaking of that; how did the interpretations of “Old Hannah” & “Amazing Grace” come about?
JB: “Old Hannah” was collaboration with the Amalgamated Ever Lasting Union Choir ...
TG: We just looked through their repertoire of tunes that they do. We chose that piece to work on, an arrangement--Jeff worked out the arrangement.
JB: It was fairly chaotic. I ran home from work. They were all sitting around the house anxiously waiting to go home. I had to set up the mics, grab guitar chords. They had no idea they were playing with us (laughs). They were a little freaked out that we had a band in the other room. They thought we were doing a recording just for them. They way it happened was total chaos but a lot of fun. "Amazing Grace" was another accident. There was nothing planned about that. Moe was playing violin on that track and just started to play Amazing Grace. It sort of developed into that. That whole record (fig.5) is sound checks really.
TG: Except for "Old Hannah," "Beautiful September," & "Cells are in Motion." The way that thing takes its shape is through the editing. We have piles of material. We listen to it all and determine what shape the whole thing was. Through editing we found the way to most efficiently make that statement.

DC: Do you normally record that way?
TG: Editing is incredibly important to what we do in terms of the out put. It is basically a constant process. We are recording in the basement and when we are playing we have the tape machine on. We may do that for weeks or months. Just pile stuff up. Then eventually, we get around to listening to it.We'll find bits the we like and that is how we create a song. Making a record is just a more refined step of that. Find out what we have and through editing make it take the shape that we want.

DC: Do you have any formal musical training?
TG: (coughs and mutters under his breath jokingly) Jef went to Berklee.
JB: Don't print that!

DC: Ok ...So why are you ashamed of Berklee?
TG: It just wasn't that much of an important experience for him.
JB: It made me feel bad about myself. There were a few teachers that were up lifting and cool, and the ones that were deserve all the props. They are truly wonderful human beings. The problem with that school, with any school . . . I guess you can print that. It is an important subject. There was a big change in art and music in the 1980s.
TG: So true.
JB: It used to be about doing the best at what you want to do and it became about . . .
TG: Commercialism . . .
JB: . . . making money. So you've got 900 hundred guitar players @ Berklee College of Music. John Scofield had a hit record in the jazz field. So 500 of them are learning to play just like him. They have that gleam in their eyes. The whole curriculum is geared towards that. It just the way the world works. It is not like you can blame the staff there or anything. The Maryland Institute of Art was the same way for that matter. It went from a bunch of freaks wanting to make art to a bunch of people wanting to graphic design. It is just the way the world is. I think a lot of it had to do with Reaganomics. That whole attitude is what we're still suffering from.
TG: I had a really similar experience--I went to the Minneapolis College of Art & Design as a film media arts student. I was there from 1986-90. A couple of years prior to me going there Husker Du would play in the student music area. There was a huge independent press scene there. People were doing crazy old home made books, films, and really outrageous performance art, punk influenced happenings of all kinds. Basically a lot of the kids I went to school with ended up working @ MTV. There was an experimental film professor there. She was my advisor. That's where I learned about Harry Smith and Stan Brakhage. They made homemade films, hand painted animation, and all that really cool stuff. There was another whole side that was really into computer animation and real slick style MTV style film making. That side totally took over. After I left, they turned out tons of graphic designers & computer graphics people.
JB: It was really heartbreaking when I went to Berklee. It had all ready changed before I went to Berklee. Before it was a smaller and more laid back program. When I started going there in 1986, it was what was popular in the 80s, Metal. There was this huge Metal thing going on at the school. If you want to learn about rock & roll music get your self a guitar and rock out. Learn some good music. Do it with some soul. The whole entire country then was about playing as fast as possible and as technically as possible. Still the guy from the Stooges and Keith Richards are still the best rock-n-roll players on the planet. They made great music… They had soul.
TG: Where is Randy Rhodes now? Is his music going to stand up in the pantheon of American musical history?
JB: Going to art school in Baltimore 1992 was the year it all changed.There was this incredible art and music scene that was tied together very much hand in hand. It was a huge amount of fun. Everyone dressed in the cheapest and fucked up outfits that they could find. In 1992, you had everyone wearing the raver look; the Adidas. They were all there to study some graphic thing. It was about economy. It wasn't about creativity. That was just really heart breaking. So it just means that we have to work a little harder . . .

DC: At my school (Montserrat College of Art) there was a constant battle between the fine arts majors and the graphic designers or worse the illustration majors. It was something really disappointing to find out. Now that I am out of art school and have been working in a warehouse for the last two months, yeah I guess I would have liked to have been a graphic designer. On the other hand, I am happy making my photographs.
TG: There is no naivety left. It all became really calculated. It became impossible to follow a dream. I grew up in North Dakota. That isolation lead to a certain naivety in deciding what to do. It is so hard to live now that when you go to college you have to be concerned with what you're going to do afterwards. I was just like fuck it. I don't care--I like what I am doing. Economically, that was really stupid of me. It's difficult to live, but I get by. I am glad to be doing what I am doing, even though it is difficult. I probably wouldn't be doing what I am doing if I were more thoughtful about my career.
JB: Some where in school I had the realization that I would be doing the same thing ten years down the road that I am doing now.