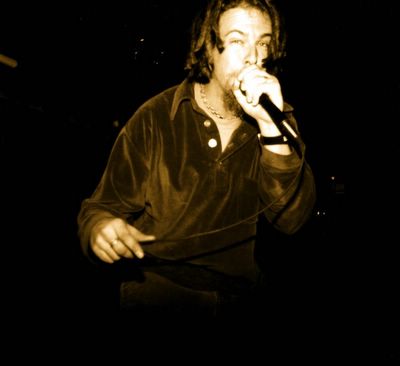 Glen Galaxy was one of the folks behind one of the 1990's best group Trumans Water. Their spazz-out noise rock left some folks scratching there head. While others, like my self, found their joyful noise to be utterly amazing. Glen left the group to Start Soul-Junk. Soul-Junk may be the only Christian, noise, free jazz, rap, skronk rock band out there. This interview was conducted via e-mail in March 2004.


Dan Cohoon: Let's start talking about Trumans Water. What is the History of Trumans Water?
Glen Galaxy: Trumans Water started in April '91 & hooked up w/ them 3 months later when the advertised for a singer "brain optional". I learned all their songs & then started singing while drumming (along with the other drummer), then they bought me a guitar so I would quit drumming. I wrote a rash of songs & Kirk wrote some too & we ran into the studio & recorded them & released "of thick tum" on handmade-cover vinyl. next thing we knew we were touring like madmen all over u.s. & Europe. In august of 93 God whispered & told me to leave & start soul-junk, which I did.

DC: Are you still involved with them? Or do you just play with them if all you guys happen to be in the same place at the same time? I saw a show in Portland you played with them a year or two ago which was amazing.
GG: I have played with them on several tours & we did the last CD together here in San Diego. Since we lived together for 2 years & constantly improvised there's a chemistry there that's always easy to pick up wherever we left if off. They tour every year as a 3-piece, I only join in occasionally. I remember that Portland show though, that was a cozy romp.

DC: Tell me the history of Soul-Junk. How did you meet up with Slo-Ro?
GG: Soul-Junk started late 93 when I jumped TW ship & recorded the first few Soul-Junk releases (1950 LP, 1949 7", and 1950 free shrimp cassette). The first year it was just me playing everything & trying to get my newlywed wife Cathleen to sing with me. I bashed on guitar, drums & smothered everything with midrange (1948 EP, 1951 LP).

Then a band formed - Ron on guitar along with me, Brian on drums, & my brother Jon on bass. (1952 CD, 1953/54 CD) Then Chuck P came in making strange snark & Nathan the philo professor replaced Brian on drums (1955 CD). Jon and I started making lots of drum & bass-noise tracks on our own. Chuck & I did many late-late-nite sessions in a radio studio playing with massive feedback & such (also on 1955 CD). We started touring a lot & everybody except Jon couldn't tour, so we started playing with Abe (drums) & Mia (guitar). We toured with the Danielson Famile on three big tours & Jon married Rachel Smith Danielson.

Then I started recording 1956 with Rafter Roberts, who I ended up going into business with. We spent somewhere between 600 & 700 hours making that CD & the 1943 12". It had rock elements, drum & bassy elements, plus I had started consuming mountains of underground/ experimental hip-hop so that was all over 1956. We performed a lot of that as a band - I toured around with Dennis, Andy & Mizzicah from FIF backing me up, and then decided it was too crazy trying to teach all the songs to multiple rhythms sections & started the hip-hop live set.

DC: Why do you choose free-jazz, noise, rap, rock to praise the Lord?
GG: Soul-Junk's always been a go-where-you-feel-it operation. Breaking off from Trumans Water to praise the Lord was enough of a baptism into mid-air so I just kept going. The very first LP has a song that goes "The Lord is the Spirit, & wherever the Spirit of God is, there is freedom." So I have always been way more into the Spirit of God than any sort of concept of who I'm supposed to be or who the band's supposed to be.

DC: My brother is convinced that there is no way the dude from Trumans Water could be singing about Jesus and it not be an inside joke. What would you say to people who doubt the sincerity of your beliefs?
People get so far inside their cultural modes that they can't see any kind of reality outside. Aesthetics & religion (as dead system/institution) have way too much in common. It's a drag, I have seen a lot of brilliant people get sucked into aesthetic shrine-land, just like I have seen a lot of good people get completely dead-religious. People who don't know & experience the Spirit of God spend all their time trying to figure it out. I'm just a happy piece of PVC.

DC: What was your religious up bringing like? Did you grow up going to church or did you choose your faith later on?
GG: I grew up in the church, read the bible as much as anybody, but didn't really have much. I went off to school & read a Couple hundred existential/ Russian/drunk authors & decided I was an atheist. That lasted about 3 years. Then God cornered me & asked me if I'd found anything. I hadn't. So I listened to him & started praying desperate stuff & all of a sudden I felt what I'd been missing out on. That was about a year before I joined Trumans Water.

DC: How were you introduced to avant-guard or out music?
What did you grow up listening to?
GG: I found out about the Velvet Underground in like 1987, got all their records & read all about them. That really got me into the last 30 years of noise. Before that I was a rocker. I snuck Iron Maiden/ Led Zeppelin/ Ozzy records past my parents & such. Underground rock & hip-hop was incredibly fertile soil in the late-80s. Everybody was so sick of the decade of cheese. Reading about Royal Trux, Sonic Youth, De La Soul would get you a list of about 50 records you'd never heard of & that was an easy way to blow a paycheck.

DC: What does the future hold for Soul-Junk?
Now sloRo has put together a remix CD (1937). I have been commissioned from on high to sing the entire bible word for word, whether or not sloRo will be in on that remains to be seen. 1john, 2john & 3john should be ready to release by summer of 2004..
a=1/f squared * archives * phonography * photography * links