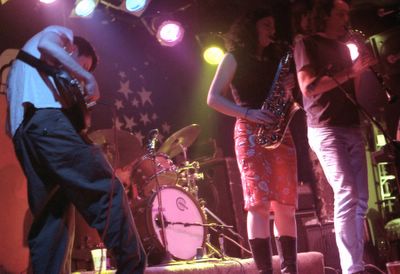 Rollerball was one of the first bands to really to knock my socks off when I moved to Portland around the turn of the century. Their strange amalgam of jazz, electronic beats, dirgey ballads, full on skronk and all out rock made quite an exotic brew. The niceness of their music is only matched by the niceness of them as people. I did an e-mail interview with three of the members of Rollerball, Mini Wagonwheel, Shane Bunny De Leon and Mae Starr.

Dan Cohoon: Tell me about the history of Rollerball. What was the original line up? How did the sound of Rollerball evolve?
Mini-Wagonwheel: For me, Rollerball started when I met Mae. We played shows, and made recordings with different people in Montana in the early 90's.These projects we not known as Rollerball, but it was there that we began to find our sound. We have just kept an open mind and stayed with it.
Shane Bunny De Leon: I was a huge fan of Rollerball before I ever joined. I would go see them early on as a four piece in like 1995, and then when they became a three piece in 1996 they were even better. The song structure began to open up and they became more atmospheric and emotional.
I was playing with Mini and Gilles in an improve band called Stertorous starting in 1995 and began doing the art and design for Rollerball in 1997. It just was a natural extension of our friendship to bring Stertorous and Rollerball together under one blanket.We are fairly democratic and musically open so we just distill the influences and ideas and share and give and take.
Mae Starr: Mini and I played in two different bands in Montana and then moved to Portland met up with Herman Jolly who we used to know in Bozeman. Wrote a letter to Gilles in Montana and asked him to move to PDX to be our drummer. Later we drifted apart and became a three piece of Mini, Mae, and Gilles. We randomly met Shane in our apartment building, called the Mae; he did the art work for Garlic our first cd. Joined the band and Amanda came later on. Our sound has evolved through a constant will to grow as musicians and people. My taste in music changes monthly so I suppose that comes out in our sounds all these years.

DC: What led you to move from Montana to Portland?
MW: We were bored and looking for a life. Once we moved, it was hard to find a good drummer. We had played music with Gilles in Montana and he was my dream drummer. I sent him a tape with some songs and he came out. A band can get away with anything if they have the right drummer...
SD: I left Montana when I was 17 and went to San Diego for 6 years and spent my time singing and freaking out in a funk band called Freak Seen and skateboarding as much as possible. On a tour we went through Portland and I fell in love with it, so when that band broke up I moved here where I met the rest of Rollerball who by chance happened to be from Montana.
MS: Montana has none of the culture and thriving music scene that is in Portland. Mini and I played at the X-ray Cafe a few years before and that helped our decision to move here.

DC: How would you describe your music? When other people attempt to describe you music it always falls short.
MW: I would hope people would listen to the music and feel something.
MS: Hopefully there are no definite words to describe our music. Words seem to complicate everything. A good color for our music would be puce.

DC: What is your musical background as far training goes?
MW: Mae, Gilles and Amanda have all played since they were very young. Shane and I are newcomers; we have only been playing 15 or 20 years. Gilles has played in cover bands (4 sets a night), Montana state marching band, Jazz gigs, weddings, country gigs. He is money. Amanda has lessons with Jef Brown and we all know that is a good thing.
SD: When I was little I loved this Montana family band called the Fiddlin' Ferches. The father played fiddle and the mother and children accompanied. He played western classics like the Orange Blossom Special and some hymns also. They're Christians and friends of myfamily. I always wanted to fiddle when I grew up. I started on viola and squeaked my way through school and private lessons. In junior high I was playing in honor orchestra at Lewis and Clark Junior High. The music we were playing was nowhere near as cool as the fiddle and I couldn't get past second chair, so I switched to electric bass and then finally trumpet when I was around 22. I always sang and twinkled on the piano.
MS: I am trained in classical piano it has taken me years and years to remove it from my brain and try to be more free. Structure and theory are important but magical music has no rules in my opinion. 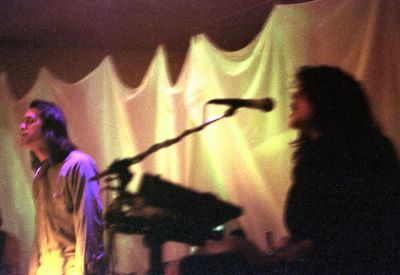 DC: How were you introduced to avant-garde music? What did you grow up listening to?
MW: I had a really good private instructor named Rob Kohler who blew my mind. Deep Listening, free jazz, One day we spent a whole lessonsitting in the sun looking at a tree. Before I met him I liked metal and guitar music, like Hendrix, Iommi Rhodes and Page. I watched the song remains the same a couple hundred times. Now I think it is all the same thing.
SD: Great this is what I like to list influences and cool fucking bands. This is fun Dan and I miss seeing you around Portland; always out; supporting weirdo music and artists; hanging up at the telemarketing job; unemployment.This is a flowing order of what I liked from early onto now: Star Wars eight track, Carpenters, Johnny Cash, Run DMC, Beat Street, U2, Nucleus, Prince, Queen, Styx, Black Flag, DRI, Butthole Surfers, Descendents, COC, Bauhaus, Tones on Tail, Cure, Smiths, Bad Brains, Metallica, Fishbone, The Cult, Jane's Addiction, Nirvana, Chili Peppers, The Beastie Boys, Funkadelic, Miles Davis, HR, Fela, Die Kreuzen, Three Mile Pilot, Soundgarden, Crash Worship, Meat Puppets, John Zorn, Mouse on Mars, Squarepusher, Bobby Conn, Saul Williams, Blackalicious, Bjork, Nudge, Max Tundra, Art of Flying, Six Foot Sloth Pretty main stream stuff if you ask me
MS: Mini introduced me to avant garde music. I grew up listening to allot of radio top forty...gag...but in the 70s it wasn’t so bad. I used to love the bad metal.

DC: I always love your packaging. Is it collaborative or does one member of the band comes up with it?
MW: Shane is a printer and that is his realm. Mae and Gilles are also visual artists, but Shane has the vision for that stuff.
SD: I have been responsible for most of the design and printing of the packaging for the larger releases. Mae does a lot of hand painted original covers for the Nillacat label releases of cdrs. I have a letter-pressed a lot of the CDs too. The artwork is usually a mix of Mini's photos, Mae's painting, linocuts, and photos, and my own artwork. I just see what we have and choose a path for each release. The band gives me pretty much free reign on the visual side of the band, so I try to incorporate everyone's visual art into it too.....
MS: Shane does most of the layouts for our CDs. I contribute allot of the art and Mini has done allot of the photos.

DC: You released a live disc that was recorded on the first day of the Iraqi war at KBOO radio station in Portland, Oregon: Do you think art and music can effect political change?
MW: Good art or music can provoke thoughts; I believe feelings are stronger than words, so, yes art can effect change if we want it to. Change has to come from within.
SD: It can create tension and emotion and that can possibly open minds to other ways and ideas. Music can blow minds. A blown mind might want to do something to change this mess we are finding ourselves in...
MS: Art and music can effect political change. one idea in someone’s brain can move allot of mountains. Politics are nothing. Just men running around getting everything all out of balance. Music and art are what you can give back to the universe as an apology for fucking up the animals and trees ect. ect.

DC:How do you go about recording?
MW: I just like to make shit and follow my instincts, in Tape OP; someone said that you can record a good band on a blade of grass. I like that.

DC: Do you rehearse pieces out live then record them?
MW: Sometimes.

DC:What is the difference working in the studio and working at home recording?
MW: Sometimes it is nice to go work in a different studio just to change the routine, but my home is our studio, and that is where I like to fuck shit up. Mel Detmer is Rollerball’s sonic safety net. She masters the stuff. She is really, really good.

DC:What is the set up for your home studio?
MW: Gilles has nice Otari 8 track with Universal audio and Alexander pre amps. Nice stuff. We also record on my PC and a 4 track a lot because it is simple. I don’t see myself paying to record in any fancy studio ever again.

DC: I really loved Shane’s rapping on Real Hair. Are there any plans to make rap a part of you full time arsenal?
SD: The rap will continue because you just can't stop it. I have been doing recordings as Massive Snowflake. There is quite a bit of rapping in it.

DC: I know when Road Cone shut down you had to go out and look for a new label. Have you found a new home?
MW: Silber has put out our last 3 CDs, and it has gone well, we don’t do contracts or anything and I like that very much. Trust and honesty are nice things.
SD: Brian John Mitchell and Silber Records rock. He is releasing our eleventh CD Catholic Paws / Catholic Pause and his third release by us in the next couple of weeks. We are then touring in Italy and Slovenia for a few weeks in April.

DC: What does the future hold for Rollerball?
MW: We are going to play a few shows and see what happens.
SD: Playing shows, recording, oh yeah......
MS: Our futures holds going to Italy in April! Then I hope we all continue to grow musically and magically.