Dead C Montage (photo: Stephen Clover)
After about eight weeks of having my parents in town, I was starting to scrape the bottom of the barrel in terms of fun things to do with them. Not wanting to have to resort to a daytrip to Owlcatraz or a leap-of-faith night venture like the free but unbearable Barbara Morgenstern concert, I was looking for something tried-and-true yet preferably affordable to a civil servant and impoverished recent retirees. So when I came across the flyer advertising “The Dead C: a free event” for 31 March at the City Gallery, I thought, “Natch!” What could be more affordable than FREE, and what could be more time-tested family unification therapy than simultaneous eardrum-bursting at the hands of New Zealand’s most revered noise merchants? 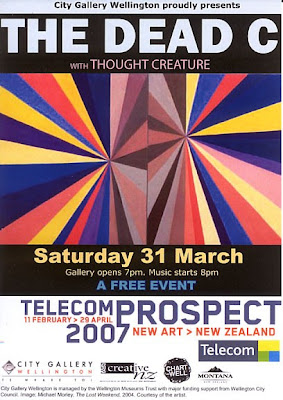 Actually, the truth was I wasn’t sure whether my parents would like the Dead C. They’re both pretty open-minded people, and my mom seemed to enjoy the Dog-Faced Hermans and God Is My Co-Pilot concert I took her to during my college’s Parents’ Weekend in 1993, but I still acknowledged that this would probably be a stretch for them. I just couldn’t miss a free performance by the Dead C, who very rarely play in New Zealand and even less frequently venture overseas. Despite living in the country for six of the past 12 years, I hadn’t seen them play (or heard of them playing) since their gig at the Wharf Hotel in Dunedin in February 1995. That was my first week in New Zealand, and I was fortunate enough to see this outfit plus Gate and A Handful of Dust for $5, amongst cheap jugs of Speights beer and the gauzy waft of clove cigarettes, patchouli, other incendiary herbs, and old wool sweaters. While I don’t remember much about the sonic landscape of that evening other than it was rugged and expansive, I recall a feeling of elation at being where I was. My spirits were only slightly dampened by the fact that my attempt to make this event a “first date” with a young woman I had set my sights on had been met with a confused no-thank-you (note: we later married, but this required a first date of The Clean and the Verlaines, whom she still enjoys far more than the Dead C and their ilk). 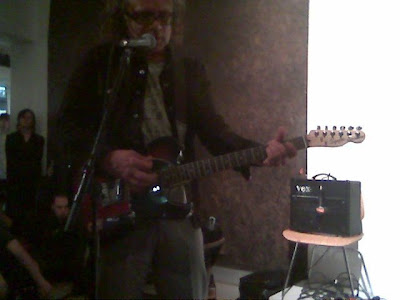 Anyhoo, this recent concert in Wellington was brought to the City Gallery by wunderkind Amy Howden-Chapman to complement an equally challenging exhibition of works by emerging New Zealand modern artists, called “Prospect 2007”. Apparently Michael Morley (of Dead C and Gate) is one of these artists. His radiating shards of psychedelia incorporated in “Midnight Cowboy” and “The Lost Weekend” (pictured on the flyer) and his primitive rendering of a needle on a turntable (entitled “There Is No One What Will Take Care of You” in reference to the Palace Bros lament) were accompanied by other artists’ works such as a crocheted barbecue, photos of sheep in shit-stained but colourful wool sweaters, a video of quarrelling medieval musicians, multiple pinhole cameras based in a giant wooden reclining figure eight, and a video of young Maori Aucklanders arguing whether 50-Cent or Eazy-E was the best rapper in the world. 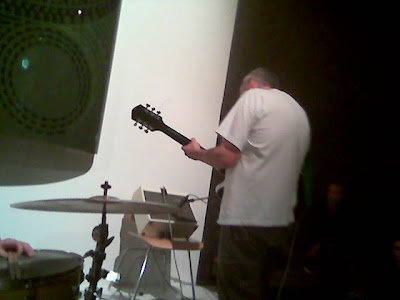 Bruce Russell (photo: Stephen Clover)
It was within this rarefied hipster milieu that Thought Creature kicked off the evening’s aural festivities with a herky-jerky, frantic but persistent pulse that drew people to the second floor balcony to peer down at the ruckus, and others to congregate in front of the nonexistent stage in the ground floor lobby. A couple folks even danced. I hadn’t heard of this band before, but they weren’t too shabby. 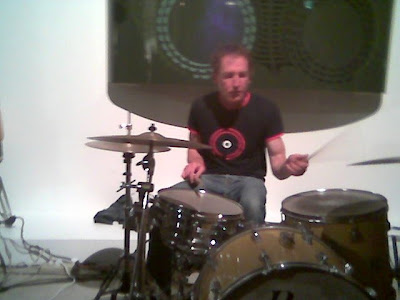 Robbie Yeats (photo: Stephen Clover)
After a lengthy break following Thought Creature, allowing more time to absorb the deeper meaning of cling-wrap “waterfalls”, I began to hear what sounded like very large speakers suffering a seriously unpleasant trip to the dentist. I knew what this meant and hurried to the second floor railing to peer down at the perpetrators. Yes, it was indeed Messiers Michael Morley, Robbie Yeats, and Bruce Russell of the Dead C. No spring chickens anymore, they wore their nascent decrepitude with a sort of rumpled dignity that almost brought tears to the eye. Stage left: Michael Morley, with trademark black thick-rimmed glasses, mumpsy cheeks, frizzy grey/black hair, and guitar. Stage right: Bruce Russell, with signature oversized t-shirt, cultivated mead-gut, droopy pants struggling to find an ass to cling to, short-cropped grey hair, and a collection of amps and monitors with a guitar for playing them. Centre stage: Robbie Yeats, looking like a sunburnt South Island shepherd, with thinning curly reddish hair, sad but friendly eyes, a bottle of Mac’s Gold, and a wiry frame hunched over a vastly simplified drum kit. Michael Morley & Robbie Yeats (photo: Stephen Clover)
There was little if any on-stage banter, and only a few times during the 90-odd minute set did the music stop long enough for the audience to applaud the previous “song,” but this worked just fine. What we got instead of rehearsed off-the-cuff witticisms were lengthy sonic explorations that were pretty darn transcendental. More than one person just closed their eyes for a while and let it wash over them. This was especially rewarding during the drumless periods, when Morley’s distorted chords and Russell’s orchestrated feedback swelled to form a shimmering, pulsating wall of sound. When Yeats’ syncopated bass and snare drums entered, it seemed to become the melody or lead voice, and I found myself visually and aurally drawn to the passion and power coming from the wizened figure at centre stage. Morley’s occasional monotone moaning served more as a background anchor like a bass guitar than a lead vocal. Due to the not-unexpected high volume and Morley’s understated utterings, the lyrics were pretty indecipherable. This, and my incomplete knowledge of the Dead C’s recorded catalogue, led me to believe that their compositions were either (1) unrehearsed improvisations, (2) pieces from albums I’m not familiar with, or (3) vastly reworked and unrecognizable versions of songs I do know. Maybe it was a combination of all three, and someone more in the know who was there can shed some light. I definitely didn’t hear “Miiiigghhhhtyyyyyy” or “Bad Politics, Baby!” through the sonic morass. But I’m not complaining.

My parents didn’t complain either, though halfway through they informed me that they were “stepping outside” to “get some fresh air.” I suspect it wasn’t completely their cuppa tea, but they were cheery enough when I emerged into the sparkling night of Civic Square. I was cheery too. The show had ended with roars of approval from the 100+ attendees, Robbie flashing an aw-shucks grin, Bruce waving and bowing like the one-man symphony orchestra he is, and Michael reservedly nodding before offering a battered suitcase full of vinyl and CDs to a smattering of money-wielding aficionados. Cheap bastards like me slipped away with smiles on our faces. I felt like I had attended some sort of “be-in” led by sonic spiritual gurus and like-minded soulmates, and I guess I had. The music was a generation removed from my parents’ experience of similar events, but they recognized the blissy glow and reckoned they had seen something that meant something to me. Group hugs ensued (not really), and we rested our weary eardrums for another day.
Links:
The Dead C
Ba Da Bing Records
City Gallery
a=1/f squared * archives * phonography * photography * links