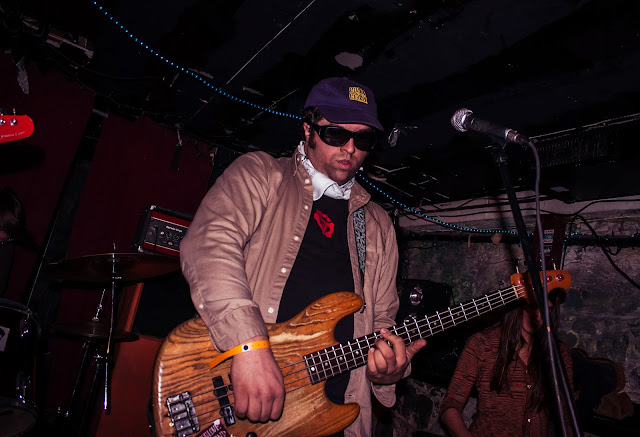 Human Adult Band @ The Charleston (Brooklyn, New York) 1/15/10 photo: Dan Cohoon
I walked into a house show in West Philly at the former home of members of the Dead Milkmen; my friend Scott just happens to live there now. A tall gentleman asks me, “Would you like some Sweet Potato Pie?” That person was T. Penn from New Jersey's finest psych/sludge/punk rawk group Human Adult Band. The Human Adult Band sounds best in all its over-modulated glory in the analog format. In fact they don't have a bandcamp page because the MP3 format fails to capture the full scope of the Human Adult Band. They seem to evolve constantly, from show to show, recording to recording. In all the change, the sonic gunk remains. 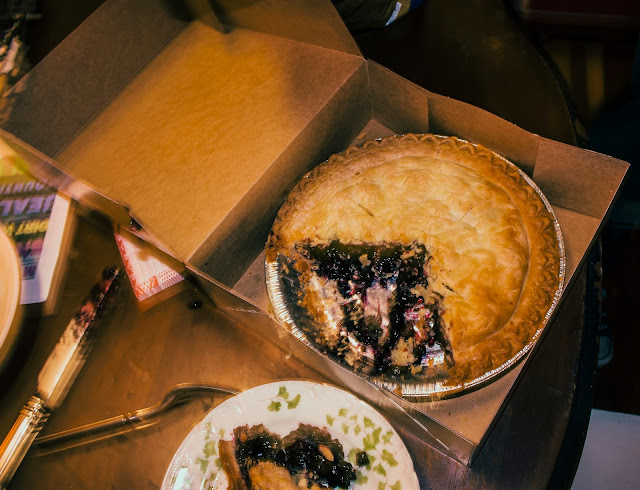 Pie courtesy of  T. Penn  photo: Dan Cohoon
Dan Cohoon: The first time we met, you offered me a piece of Sweet Potato Pie. Do you bake pie or do you just appreciate the form? What do you look for in a pie?
T. Penn: I don’t bake pie. I do like good pie.  I’m not very good in the kitchen with the exception of a few ethnic dishes, in which I take pride.  I met you at a house show, so I brought something to the host’s house to be a good guest.  A lot of people go to house shows and bring nothing. Unfortunately, I have even met plenty of people who go to house shows without money for the cover and bring beer only for themselves - that’s a bad house guest.  So, I bring pie to some house shows.  If I don’t have time to stop at a market and get a pie, at very least, I leave some music / zines from my bistro for the host(s). 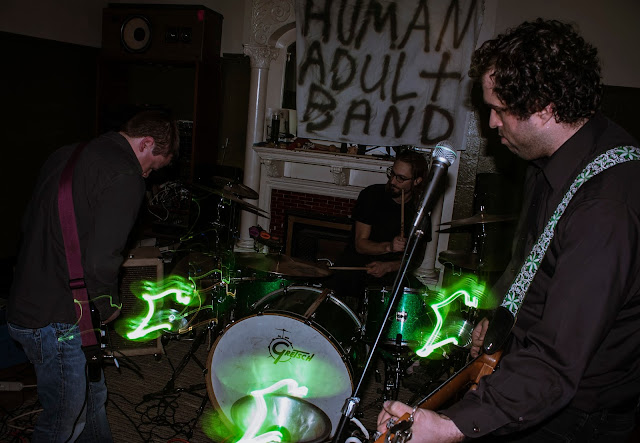 Human Adult Band @ The Mansion (West Philly) 10/18/2014  photo: Dan Cohoon
DC: What are your earliest musical memories? Did you grow up in a musical home?
TP: My parents were not musicians, but there was a lot of music in my home.  My mom liked rockabilly and doo-wop.  I used to go to free concerts in the park to see these old bands with my mom.  I have her rockabilly and doo-wop records now, and they are prized processions.   My dad likes Buddy Holly, Van Morrison and jazz.  I remember often playing air piano on his dashboard on drives to his house as a kid.  He encouraged this and also bought me my first electric guitar.
My earliest musical/record memories are sitting for long periods of time in front of my Fisher Price ™ record player with Pacman and He-Man storybook 45s.  I was about 6 years old.  I also have a fond memory, at around age 7, making cardboard guitars with my neighborhood friends and rocking to the Beastie Boys’ first LP.  One of the Beasties had an “Oh Sh*t” pin on his jacket.  The 7 year old me secretly liked that. I also remember seeing a P.I.L. music video at around the same age and Johnny Lydon scared the sh*t out of me. [Proofreader’s note: check out AWKWARD interview with Jon Snyder in 1980 (YouTube is your friend)] 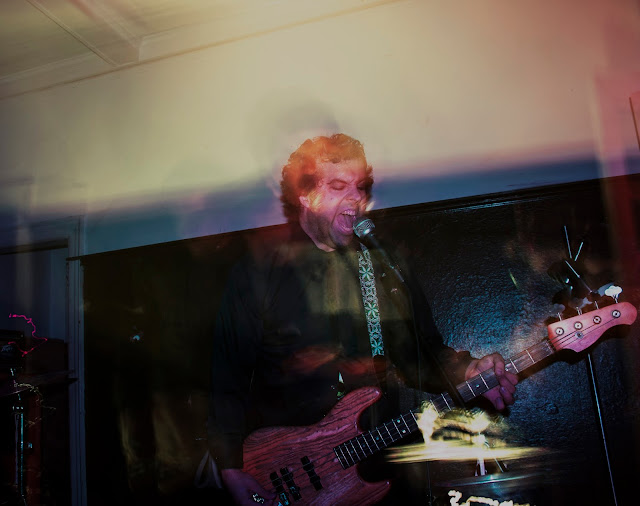 Human Adult Band @ The Mansion (West Philly) 10/18/2014  photo: Dan Cohoon
DC: Which bands or albums have had a transformative effect on your life?
TP: In 6th grade, Nirvana was a game changer for me. Before that, I liked mostly pop of the day: Bruce Springsteen, Michael Jackson, Billy Idol. Listening to Nirvana interviews, reading their liner notes and watching for what t-shirts they were wearing led the way to cool underground music. I think it was that way for a lot of my generation. Other albums that have had an early transformative effect on me since then are Sonic Youth’s “Sonik Death,” CAN’s “Tago Mago,” P.I.L.’s “Second Edition.” After those records, which I found in Middle School and High School, I would have to say that I have been in continuous flux. I get inspired by new music very frequently then onto the next thing than back again. That probably explains the reason why my band is the way it is, 'evolving constantly' like you said. 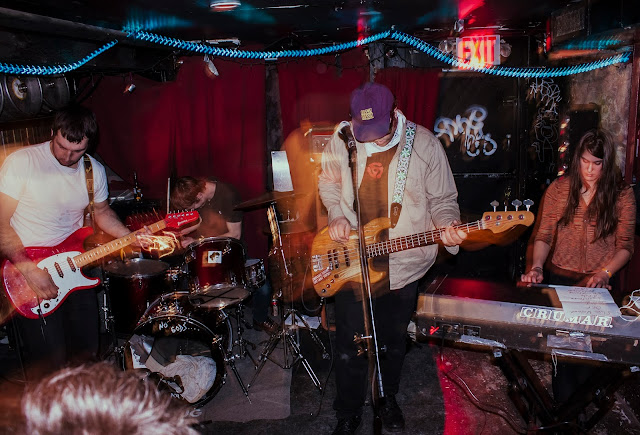 DC: Mike Watt said you are either a “ball hog or tug boat when it comes to bass playing”. In which camp would you place yourself and why? What do you think of the analogy?
TP: Probably tug boat. A mentor of mine refers to good bass playing as “driving the bus.” When he came out to see us play, he told me I was a good bus driver. I like the analogy.  I would say that Matt Freeman from Rancid is a ball hog, and Chris Novoselic from Nirvana is a tug boat.  Also, Lee’s new bassist in the Dust, Tim Lüntzel, is a ball hog, but I love it. When I see the Dust play live, I can’t help but to watch Lüntzel the whole time. 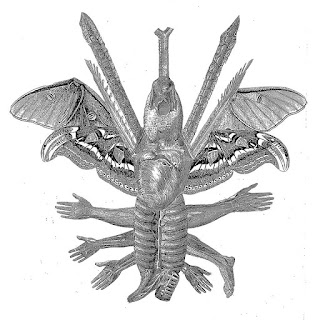 Big Blood/Human Adult Band (split 7")
DC: The bass is very central to the band's sound. Since you are the principal musician behind Human Adult Band why the bass?
TP: I fell into it.  In my first band in middle school, we would switch instruments a lot.  I didn’t mind playing the bass.  I feel like sometimes people feel like they get ‘stuck’ with the bass in those types of situations. I embraced it.  I still embrace it.  I also write most of our songs on the bass, which probably contributes to our unorthodox sound.

DC: I read in an interview on WFMU that you feel MP3s fail to capture the sound of the bass. How does this translate to way you sell merchandise online, or promote the band in a digital landscape?
TP: I do very little promotion of mp3s / computer music listening because I don’t like it.   For me, computer music or listening online is just for reference. Use it to see if the music is right for you.  Then if it is, you buy the record, tape or cd for a true listening experience. Computer music listening is like looking something up in an encyclopedia.  You can’t really use a chapter in an encyclopedia as your only research unless you’re in grade school or something. 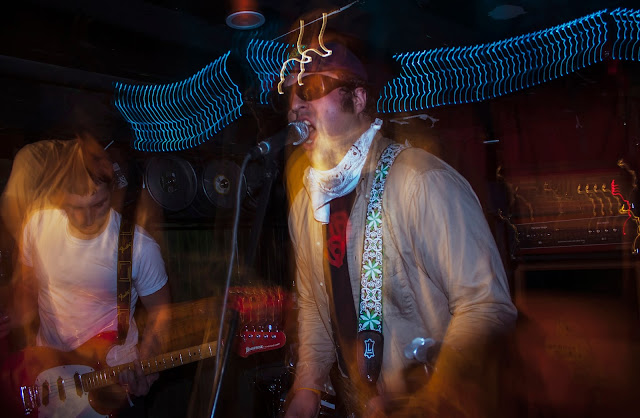 Human Adult Band @ The Charleston (Brooklyn, New York)  1/15/10 photo: Dan Cohoon
DC: The sound of your band seems to change from show to show, record to record, but the core of sludge remains the same. Is there a core group of members of Human Adult Band or is it who ever shows up to practice or the show?
TP: These are the current members:  Me - Vocals / Bass / Guitar,  Chaz Wetlands - Guitar / Drums,  Kyler George - Drums,  Phil Connor - Guitar,  Jim Schmidt - Guitar,  Justin Mank - Vocals / Guitar / Drums,  Brian Osborne – Drums & King Darves - Drums / Vox.
Any member at any time is welcome to rehearse then play a show/record if they can make it work musically, but typically, I have a line-up in mind for certain recording projects/shows.   Sometimes someone cancels due to life or someone signs on last minute, which makes it fun.  For example, we just recorded a song in the studio for a Tri-State 7” comp that’s in the works.  I had four guys in mind (Phil, Chaz, Kyler and I) because I wanted a ‘rock’ line up as opposed to a free noise line up, out-psyche line up or bleak punk line up.   Then I realized (kinda last minute) that I really wanted Mank to be on the vinyl.  He came up with a part, and it ‘made’ the song.  This kinda thing makes the band fun. 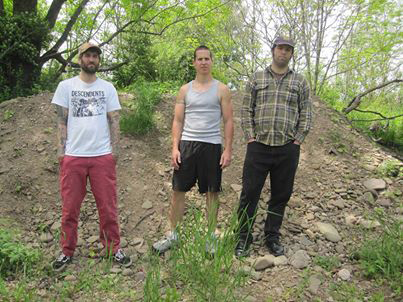 Mohawk Barbie (from the T. Penn archives)
DC: What other projects were you involved with prior to HUMAN ADULT BAND? How did they differ in process and sound?
TP: 1996-2002 I played in a punk band, MohawkBarbie.  We were four chord punk.  Only one song out of our 40 songs or so had some improv.  So, I was very good at playing fast and heavy handed, which takes a lot of regular practice. Ask any of the Ramones.  In 2000, I started to get into more improv with a noise band called Thee Black One.  2003-4 I did more improv with the street performing freak folk collective, Buckets and Batteries.  I really sharpened my improv skills with Pots &Powercells from 2009-2012.  Human Adult Band has always been in-between the route memorization and heaviness of a typical punk band and the looseness and on-your-toes aspects of a noise or freak folk jam band. 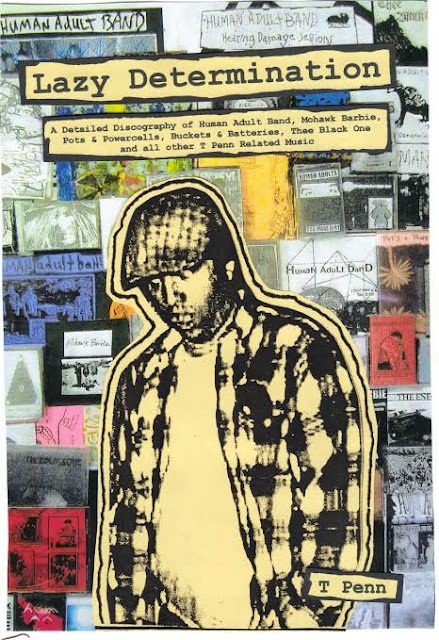 Lazy Determination by T. Penn
DC: You are also publishing a book. What is the book about? How does the process of writing prose differ from songwriting?
TP: Dynatox Ministries published the book. It’s titled Lazy Determination by T Penn.  Jordan from Dynatox asked me to compile all the details of my 85 releases (in 20 years) so he could publish a detailed discography. He also asked me to write musings on each release.  The first edition has sold out.  Jordan asked me to work on a second edition with an appendix listing many of my live shows as well as updates on what music has been released since the first edition was printed. 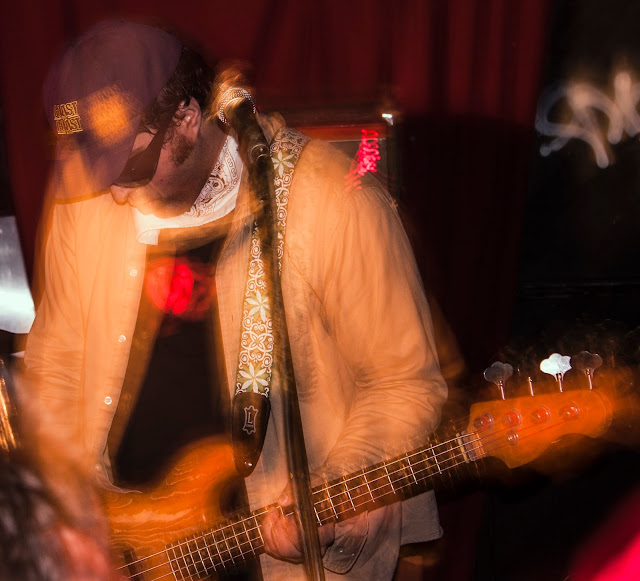 Human Adult Band @ The Charleston (Brooklyn, New York) 1/15/10 photo: Dan Cohoon
Writing a book vs writing lyrics/music are two completely different ball games.  I suggest your audience try both, and if it turns out good, publish both.  Maybe a book/record combo deal like that new Acid MothersTemple/Plastic Crimewave thing on Prophase Records or that PacMan story book/45 I was talking about earlier.  Self-publishing today is very easy and there are some very cheap options out there.  D.I.Y. or Die! 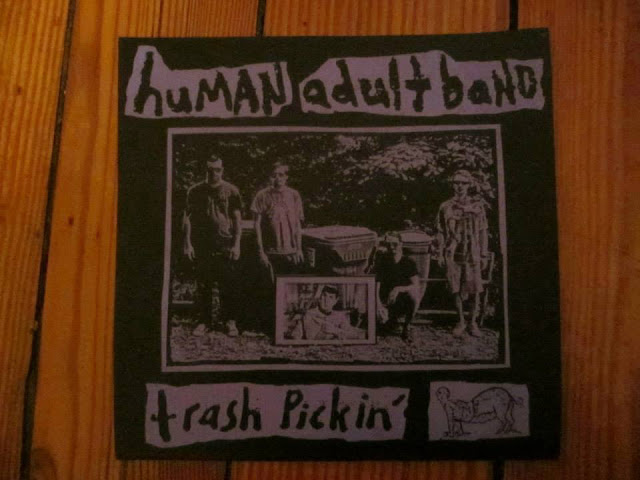 Trash Pickin' 7"
DC: What does the future hold for you and your musical/artistic endeavors?
TP: The four way or tri-state split 7” is at the plating and pressing stages right now.  I think it'll be a very cool little record because it will include a lot of my local musical peers. There’s a lot of variation of sound in our small regional group.   Side A is the folk side. The record opens with enchanting track from Shadow Band and ends with King Darves, (always taking the punk route, he crammed 2 songs on a 45 RPM 4 way split in under 2 1/2 minutes).   Side B is the out rock side with quit and Human Adult Band.  quit makes Human Adult Band sound like an in-rock band and it's also their vinyl debut.  So cheers to brothers quit.  Our track is a 3 guitar thick rocker with some wah stomp and heavy bendy riffs.     I think the compilation should be referred to as the 'Bros Comp' because 90% of the musicians on it are bros all originating from the New Brunswick noise and freak folk scene approximately 2004-2008.  I've jammed with and shared the stage countless times with most of musicians packed on this little record.   Despite the title 'Bros Comp' falling through the cracks during the planning stages, in my book, that's what it represents.  It's the Bros Comp. 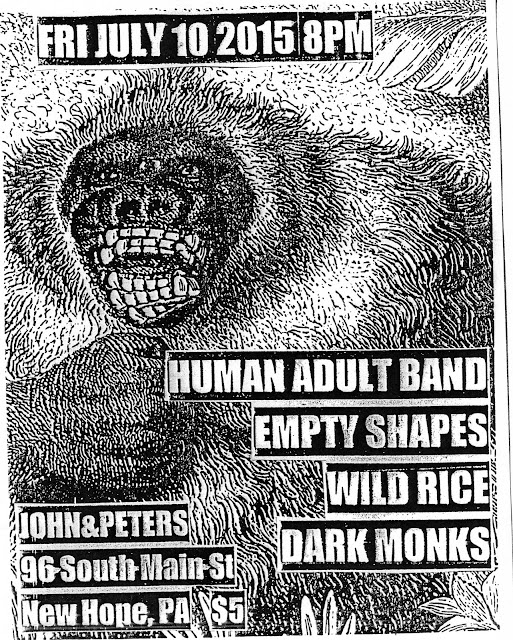 artwork by Kotar
See Links Below:


Booking:
logcabinrecordings@hotmail.com
Posted by Dan Cohoon at 7:23 AM