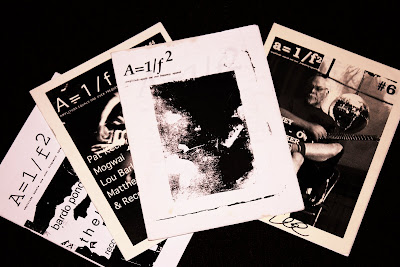 A=1/F Squared (the print zines)
My first exposure to Amplitude Equals One Over Frequency Squared was an indirect one, when in the fall of 1997 my wife Kelly and I were pleasantly surprised to see large artfully blurry photos of New Zealand musician Alastair Galbraith adorning the walls of the Atomic Café in Beverly, Massachusetts. We were surprised not only because Beverly was a long away from Dunedin, New Zealand, the home of Alastair Galbraith where Kelly and I had recently been living, but also because this small town in Boston’s northern suburbs where Kelly had transferred for art school had so far seemed to be a bit of a cultural desert compared with our perception of ‘art school towns.’ Kelly later found out that the photographer responsible was one of her fellow students at Montserrat College of Art, a lad by the name of Dan Cohoon, who was very much into New Zealand music and even produced a zine. She suggested I meet him some time, which I did shortly thereafter -- I think at another Alastair Galbraith concert at the Middle East in Cambridge in the spring of ’98. Having established our mutual interests, we wasted no time in comparing favorites and deciding that I should assist with Dan’s zine in some way. My first contribution was a sort of memoir of my two years in Dunedin in 1995-97, with a focus on the live music scene. I’m not sure if I ever saw a printed copy -- they must have sold out quickly! (ed note: is this a hint about me sending you a copy?) 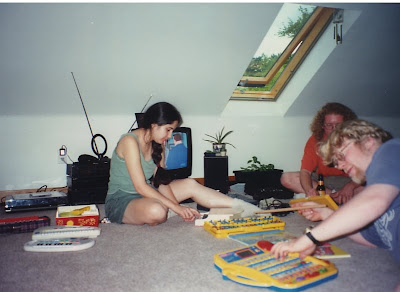 In mid-1999 Kelly and I switched coasts to Portland, Oregon, and a few weeks later were pleasantly surprised (again), finding a note on our door from Dan explaining that he had moved there too and was living on the other side of the river. So began another 2 years of collaboration on a variety of fronts, including my proofreading and occasional record reviews for Amplitude, as well as our musical project with Kelly and various toy instruments entitled “Montgomery Park” in honor of the warehouse-turned-office building a couple blocks away. We drank Full Sail and Mirror Pond beers and had some minor ‘punk rock accidents’ like broken glass percussion instruments. 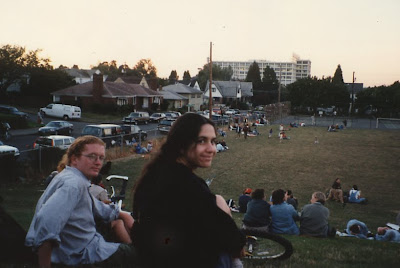 Portland had a great music scene at that time, something I have realized retrospectively, and I now regret not taking Dan up more often on his seemingly daily invites on our answering machine: “Hey guys, it’s Dan, just wondering if you kids are up for seeing [cool indie band X] at [cool indie venue Y, often “the Blackbird] tonight.” I was apparently too exhausted from my cerebrally taxing urban planning job to go out on most weeknights or even weekends, but I did manage to join Dan for an excellent Tara Jane O’Neil / Sarah Dougher show and another featuring Rollerball and Jackie-O-Motherfucker. But the shows Dan saw and I missed were recounted by him in glorious detail, such as the Guided by Voices show at the Crystal Ballroom where legend has it beer was sloshing around the floor at ankle-level.

I remember Portland 1999-2001 as the golden age of the printed zine, generally and for Amplitude itself. There was a very supportive independent publishing community and associated resources such as the Independent Publishing Resource Center where Dan hung out a lot. Advertising dollars were hard to come by, though, and when they did it was frequently a battle to save them for the zine instead of luxuries like food and rent. Despite this challenge, I do recall at least two, maybe 3 issues of Amplitude coming out during that relatively fruitful era. Dan and I were very excited when Amplitude earned a place on the magazine rack at Powell’s City of Books, and even more excited when every few months one of the four copies on the shelf would disappear into the hands of a paying customer.

In 2001 Kelly and I switched coasts again, and the following year so did Amplitude. Some time between then and 2004, Amplitude pulled the plug on the printed copy in favor of a web-based presence. This allowed the zine to free itself from the constant chasing of advertising revenue and to publish as and when it had new material. It blossomed into several branches such as Phonography (reviews), Photography, live reviews, and the archives (transcribed versions of print editions), as well as Amplitude proper which focused on interviews with some of the great lesser-known musical geniuses of the modern world.

My contribution since 2003, when Kelly and I moved back to New Zealand, has mostly been as a proofreader, though as “Antipodean Correspondent” I have also provided some live show reviews, photos, and interviews with the likes of Robbie Muir and Graeme Jefferies. My primary role at this stage really is as a rabid fan of Amplitude. Dan’s writing has steadily improved over the years -- simultaneously honed to razor-sharp insights and stretched into hilarious rambling meditations and wild metaphors. The photography, always amazing, just keeps getting better and better.

I’m proud to have been associated with The ‘Tude for 13 of its 15 years, and I suspect there are many more years of mind-expanding material yet to come. Bookmark all the various Amplitude web pages, or better yet, print them out and lovingly bind them in leather rope and slate covers. Don’t let the coming of peak oil and potential collapse of the electricity-based internet separate you from The ‘Tude. Long live the Rawk!