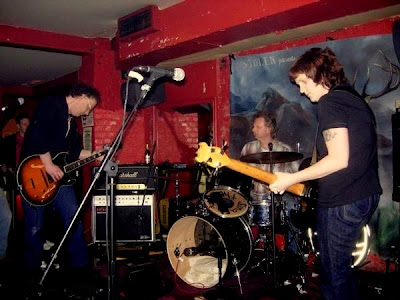 “Made a New Year’s resolution…to try and stay alive…” This timely but rather pathetic kernel of hope from the song “Subterranean” came wrapped in a walloping firestorm of high-energy desperation known as Ghost Club, who graced the shores of Wellington as part of a four-city New Zealand tour to kick off 2008. With former New Zealand legends David Mitchell (Exploding Budgies, Goblin Mix, Plagal Grind, 3Ds, Chug) on guitar, Denise Roughan (Look Blue Go Purple, 3Ds, Renderers) on bass and drums, and Jim Abbott (no known pre-affiliations) on drums and bass, Ghost Club has been based in the UK for over 10 years, releasing the albums “Ghostclubbing” in 2001 on Flying Nun and “Suicide Train” in 2006 on Hellsquad/Flying Nun. Both albums range from full-on sonic assault to tunes with more of a “pop” sensibility, evoking some of the off-kilter genius of the tunes like “Summer Stone” and “Ritual Tragick” that Mitchell penned for the 3Ds.

I found 2006’s show at the inexplicably named and somewhat soulless San Francisco Bath House to be a bit flat, but this year Ghost Club pulled out all the stops for a rip-roaring fiesta at the more intimate and legendary Bar Bodega. David Mitchell, who still manages to produce intricate depraved pointillist masterpieces (see tour poster below) despite being nearly blind, doesn’t even bother with his eyeglasses while playing guitar anymore. This suits his playing style; rather than lovingly stroking and focusing bedroom eyes on his guitar like fellow NZer Shayne Carter, Mitchell seems to engage in fierce hand-to-hand combat with his instrument – spanking, thrashing, throwing and banging it around, as well as torturing it with injections from a deadly array of foot pedals and inducing wails of feedback through forced copulation with his angry amplifiers. Enablers Denise and Jim watch voyeuristically while providing a chunky, choppy accompaniment that tethers David to some sort of structure. Denise’s basswork is comfortable and solid, honed through her years in the 3Ds, and Jim’s forte is bashing away on the skins, but they each hold their own even when switching instruments, as they did halfway through the set. 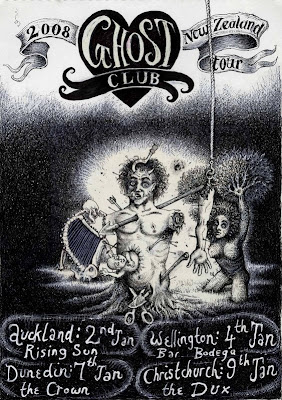 With only one acoustic 7” single (recorded in 1996 when Ghost Club was a David/Denise two-piece) and two albums’ worth of recorded material, the live set was full of familiar highlights, mostly from the most recent album. Its leadoff rager “Sea-Shaped Stone” kicked off the set, followed soon by the aforementioned holiday-appropriate slow-burner “Subterranean,” which featured Denise on co-vocals. A nice surprise was hearing “Above the Slaughter,” an almost pretty tune (putting aside the lyrics) from David’s acoustic side-project Leather Apron (10” vinyl on Long Lost Music, also containing an acoustic version of “Subterranean). The scorching title track “Suicide Train” sent the crowd off the rails, with David and Denise almost shouting over each other to express their unique perspective from this blistering doom machine. “Mother London” paid angry tribute to the group’s new home, and “La Maree” provided another melodic side to the evening’s proceedings. Only a few songs from “Ghostclubbing” surfaced, which I think included the standout rockout “Punch (your brother),” and one punter’s request was fulfilled with “Unterwasser Fotos.” At least a couple new songs were unleashed onto the appreciate crowd, and there may have been a cover along the way (or maybe it was just a newly-minted classic that sounded so good it was hard to believe it hadn’t been written before).

Word is that Denise and Jim are planning a move back to New Zealand later this year, while David will stay in the UK. This probably means the end to Ghost Club as we know it. So keep your fingers crossed for an upcoming tour to your part of the world, and in the meantime grab a slab of recorded goodness from the Ghosties, available via http://www.ghostclub.co.uk/. -Jim Ebenhoh