Graeme Jefferies Solo (26 October 2005)
@ Happy, Wellington, New Zealand
Review & Photos by Jim Ebenhoh
My wife Kelly and I strolled into the unmarked basement setting known as “Happy,” on the corner of Vivian and Tory Streets in central Wellington, to catch the hastily arranged second Cakekitchen show. A previous one at Bodega at the end of September had been lightly publicized, and it was hoped that this one would draw a bigger crowd. Alas, posters went up too late, and it was again a small crowd—maybe 15-20 people--and the attendees were a bit low-iron, at least compared with my lusty “woo-hoos” and meaty hand-clapping. 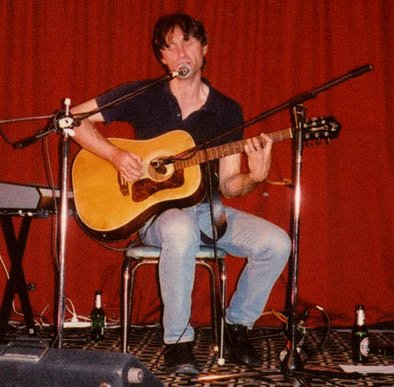 But Graeme put on a terrific show nonetheless. Impossibly tall and skinny, with sloping lobeless ears accentuating his stark, slender features, Graeme wiggled out of the top half of what had been a full blue denim ensemble, took a frantic last drag on a Beck’s, and sat himself down in a chair with his acoustic guitar, launching into a gorgeous version of the Nocturnal Projections’ “Out of My Hands.” Another acoustic number followed, maybe a mid-career Cakekitchen song I can’t recall the name of. As with many songs tonight, he froze in a poignant stare with the final strum, and the crowd took a while to launch into its polite but restrained appreciative patter. Graeme then swiveled his ass ninety degrees clockwise on the chair to take up station at an electric piano, on which he played a new (?) Cakekitchen tune called “The Hall of Remembrance” that reminded me of some of the quieter TKP numbers. Then he loped across the stage to his flying-V style electric guitar and churned out a spirited version of “You Never Run Out of Luck,” one of my favorites from 1996’s album Everything’s Going to Work Out Just Fine. He proceeded to crank up the distortion for “The Diary of Hermann Doubt,” from 1984’s second TKP album A Beard of Bees.

Graeme then ambled back to the chair and this time accompanied his acoustic guitar with a foot-operated “snare drum” that sounded a bit more like someone snapping a loaf of stale bologna with a rubber band. But the low-budget technology was positively overshadowed on the gorgeous ballad “I Don’t Want to Hear You Say Goodbye,” from 2003’s How Can You Be So Blind?, and again on the more upbeat “Another Sad Story” from 1994’s Stompin Thru the Boneyard. Another butt-swivel to the piano for the droning “Don’t Be Fooled By the Label,” an early Cakekitchen tune from 1991’s World of Sand which was quite reminiscent of brother Peter’s solo offerings like “Electricity.” Staying at the piano, Graeme sang a folky, maybe traditional ditty possibly called “Under the Walnut Tree.” He then amped up again for four songs—including “Hole in My Shoe” from Stompin Thru, during which he broke his D-string but managed to complete the job in an appropriately twisted, off-kilter fashion. “Even As We Sleep” was another Stompin highlight, with Graeme’s metal ring on his right hand clacking out the beat on the base of his axe before his left hand on the guitar neck trilled the foreboding notes that lead to the glorious chorus. The last electrified number of the four-song set was “Words Fail Me,” another Nocturnal Projections song that, like “Out of My Hands,” was recorded several years later by This Kind of Punishment. 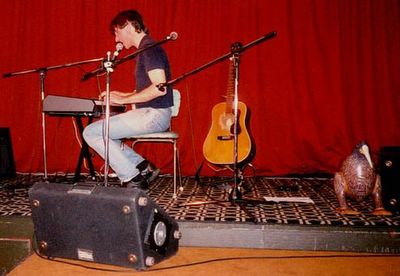 The acoustic highlight then followed, an epic version of “You Make a God of Money,” from 1996’s The Devil and the Deep Blue Sea, which he re-learned in the preceding few weeks after a request from one of the attendees of the earlier Wellington show. The bologna-snare emerged again for “We See in the Dark” from How Can You Be So Blind, and then it was piano time for an instrumental I didn’t recognize and “Ahead of Their Time” from TKP’s hard-to-find self-titled first album.

Then came the ambitious closing songs, when Graeme played electric guitar to an accompaniment of himself playing drums, which he had recorded in Germany just before flying to New Zealand. “Dave the Pimp,” from the first Cakekitchen album Time Flowing Backwards, scorched ahead with abandon until the drums went astray in the final minute. “Strung Out”, the leading track from the new album, was performed with sexy gusto and no technical glitches, and I think a satisfyingly edgy version of “Mr Adrian’s Lost In His Last Panic Attack” from Stompin Thru was in there somewhere.

At the conclusion of the guitar-drum maelstrom, Mr. Cake said “thanks”, leapt off the stage, spilt his beer jumping back onto the stage to shut off the undead drum track, and then leaned exhaustedly on the corner of the bar while people far-too-politely whimpered for an encore. Eventually Graeme asked the crowd, “So, do you want to hear a few more songs?…I’ve got ‘em, so I may as well play ‘em.” 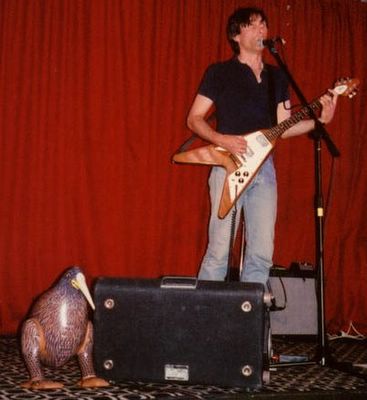 A splendid all-electric encore followed, and although my cassette tape ran out, I seem to recall: the anthemic “I’m So Glad You Dropped Out of High School” from the new album, the lovely “I Know You Know” from The Devil and the Deep Blue Sea, the “first song on the second side” of the first TKP album--otherwise known as “Two Minutes Drowning,” another TKP gem by request called “The Men By the Pool,” and the jangle-pop of “You Know I Really Like Your Style,” from How Can You Be So Blind.

I then chased Graeme from one corner of the room to another trying to foist another Beck’s on him and share my adulation. He gamely chatted a bit before I bought a couple CDs, patted him on the back and thanked him for an excellent show. The man was tired, and understandably so. It’s not every night you play 25+ songs spanning a 24-year career for a crowd of maybe 22 on a midweek in a basement bar in your home country in which you haven’t played in 15 years. I felt very fortunate to have caught this rare live glimpse of Graeme’s musical genius. (Jim Ebenhoh, 2005)
Links:
The Cakekitchen
Discography
a=1/f squared * archives * phonography * photography * links
Posted by Dan Cohoon at 10:34 PM