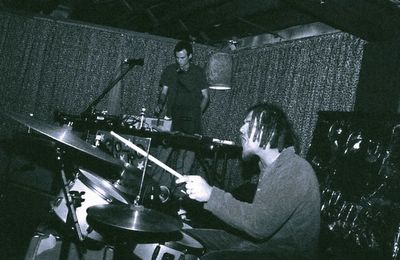 Michael Kaufmann a.k.a. Slo-Ro a.k.a. Slowly Rotating Fan dropped the beats for Soul-Junk. He is also one of the folks behind Therefore, a group that involves extended performance pieces. They use one of kind cultural artifacts (a.k.a. cassette tapes) to document their procedures. Glen Galaxy was Kaufmann's Sunday School Teacher. Glen introduced Michael to the wonderful and wild world of the avant-garde music via Glen's band Trumans Water.

Dan Cohoon: Tell me the history of Soul-Junk. How did you get involved?
SLORO: The full history of soul-junk is an epic worth unpacking (wet socks and all), but my recollection of the details are silly shoddy slop, since I was in the position of an observer until about three years ago. So the popular story goes Glen leaves trumans (which in my biased opinion deserves more recognition then they get...) starts soul-junk. Rumor has it that when soul-junk started quite a few people thought it was a put-on, a year later of gigs it was hard to dismiss assuch. What is more interesting to note is the transformation of soul-junk and its trajectory, which is not schizophrenic, but directed and highly progressional.

DC: Tell me about the conflicts you face between the avant-garde/ indy/ rap communities and the religious communities that you inhabit.
SLORO: I see very little conflict. Most of my Christian community is supportive (while they may not entirely understand) and respective of my work as an artist and musician. The integrity of both (art and the faith) has to overcome the aesthetics and politics of each. There is faith and politics in both faith and art, but if someone moves forward in humility and maturity in dealing with these things, those around will be respectful and patient, and hopefully challenged. The conflict I have seen if any is the reaction people have to the amalgamation of genres. There is a deep rooted philosophy in any genre that the thing should somehow stay pure and separate from other genres. Soul-Junk gets misrepresented as a genre-hopping/mashing scattershot, but I think Glen has always had an incredible ability to distill elements from all various types of genres, connecting to musical values and intrinsic maneuvers as opposed to fashion or gimmicks.

DC: Why do you choose free-jazz, noise, rap, rock to praise the Lord?
SLORO: I choose all and any forms of expression available to me that may bring Glory to God. It just so happens that noise flows most naturally from my pores.

DC: I stopped being a Christian when I saw the hypocrisy at my church and the church at large when I was about 11. I am interested in hearing your remarks on how you resolved conflicts between your own faith and the beliefs pushed by the religious right.
SLORO: I am not sure who you mean exactly by the religious right. This is in my opinion a fairly ambiguous term. Sure, there is the stereotype...but it is so foreign from my personal experience. But I understand your frustration with the church. I left for about 8 years and then came back. When I started looking directly at what the Gospel was teaching (what Jesus preaches), that I am both far worse of a person than I want to admit, and far more loved than I ever dared dream, and how that plays out through the life, death and resurrection of Christ, all my hang-ups and aesthetic and political differences took second priority to the realness of the Gospel. It is a Gospel of Grace and Forgiveness. That is not to say that I agree with many of the ways Christianity gets acted out via bumper stickers and political agendas (this upsets me deeply) but there is a realness that resonates deeper than humanity's ability to mess it up or miscommunication.

DC: What do you do in Soul-Junk?
SLORO: Mangle, distort, damage, sweeten, satirize, soak, trample, coerce, hood ornament, distract...live I'm part sidekick and part obstruction. On record, I’m the silly rapper and post-production sound effect guy. I have done a couple of the beats from start to finish, but mostly I rework, remix, and finesse the beats that Glen gives me.

DC: Growing up what did you listen to? How were you introduced to avant-guard music?
SLORO: I was first introduced to "avant-guard" music by Glen. Glen was my Sunday school teacher briefly during his Trumans days and my Junior year in High School. Before that I was listening to classic rock greatest hit records. Probably the biggest exposure came about when I took a semester off from college my freshman year and lived with my folks who had recently moved from suburban San Diego to New York City. I would look through the Village Voice and other papers for the most bizarre sounding things and go to them. I have always had a propensity for new experiences and the weird. I ended up attending several shows at venues like the Knitting Factory, Experimental Intermedia, and Roulette. Then my sophomore year I met Wayne Feldman (other half of therefore) and he turned me on to a lot of new stuff. Unfortunately our college radio station was AWFUL! Shortly after college Wayne and I moved to Olympia Washington (honestly unaware of the scene there) and our third roommate had a radio show on KAOS. I would go up to the station with him and go to another room and listen to all the experimental/avant stuff I could find on the shelves.

DC: Tell me about Slo-Ro. Is it an identity you use on stage or just a nickname?
SLORO: Slo-ro is short for slowly rotating fan. It has been my M.C./D.J. name for some time. It started when I was in a band called DJHappyFun. That is a whole other story. So the name stuck and when I joined soul-junk, it seemed like the obvious choice. Slo-ro as an identity didn't really start until a show in Norway when soul-junk was on tour. For the first year of soul-junk I was still very uncomfortable with my involvement in the band. I was surprised to find myself in the band. But something clicked in Norway. I had decided to put a box on my head for the performance. It was a turning point. Slo-ro the rapper emerged. I have many personalities. I have performed several times as Rush2 (solo/a cappella anthem songs) and Dutchko (awkward standup). I operate as Michael Kaufmann the visual and conceptual artist. Recently all the personalities are starting to merge. I still perform under the Slo-ro moniker and occasionally as Michael Kaufmann. But I’m starting to see this strange interaction between the characters and each of them rubbing off on one another. This stew will be fully cooked with the slo-ro solo album.

DC: What is up with the costumes?
SLORO: Live hip-hop is incredibly boring most of the time. I have seen some good live hip-hop...MF Doom, Antipop. But for the most part it is the mic and the dat player. It is horrible. And the worst thingabout it is that there is a potential for so much more. Since your hands are free from instruments there is a whole new level of entertainment you can engage. The masks are a way to bring in a newelement. The masks are also great obstructions. I am interested performing (via all my personas) with self-placed obstacles. It creates an uncontrollable variable. It makes it experimental, because you don't know what is going to happen with a large box on your head when you try to play an altered trombone. The concept of self-placed obstacles is perhaps most fully realized in "therefore". And masks are the extreme statement of artist as performer. All artists take on a stage presence. You hear a lot of hip-hop about keeping it real...I’m interested in keeping it totally off-the-wall and with a degree of fiction. But fiction that somehow transcends reality. Metaphor? Like Sun-Ra. Also, the masks remind me of some of the goofiness and strangeness of early hip-hop.

DC: Why do you use numbers as album titles? What are some of the ways these numbers can be interpreted?
SLORO: That is Glen's doing. Basically, EPs and Singles go down from 1950, full-lengths go up. I think that Glen wanted an easier way to keep track of releases and name releases.

DC: Your other project is Therefore. Tell me about that project.
SLORO: I think that is a separate interview. Of all the projects with which I have been involved, Therefore is the most conceptually thought out. Therefore can perhaps best be understood by our actions; long shows, guerilla sound installations, progressive economics, new contexts for non-antagonistic "avant-guard" performance and music. We have had some wonderful opportunities as Therefore. We have had the chance to show our work along side of Robert Rauschenberg. We performed an 8 hour gig at a public high school for about 700 students coming and going through he course of their school day (probably one of my fondest therefore moments). Most importantly, I really enjoy making music with the other half of therefore, Wayne Feldman.

DC: You do one of a kind of cassette tapes. I love the format. A one of a kind CDR just doesn't have the same power as a cassette. Do you think that format is on its way out? What are your reasons for choosing the format?
SLORO: Cassettes on their way out? Well, hard to say. One thought that keeps coming to my mind in regards to cassettes is this idea of recycle culture. Cassettes seem safeguarded from apocalyptic times. You can't copy cds over and over again. Sure, cds are incredibly disposable and inconsequential, but there is something about the consumer power imbedded in a cassette. You can destroy a cd, but you can tape over a cassette.We choose cassette more out of a matter of convenience I think. A regular Therefore activity was dumpster-diving behind a Value Village in Olympia WA. We would find all of these cassette tapes. We decided we should make unique one-of-a-kind tapes to hand out to folks. Cassettes are great for this because they are easy to put in your pocket. Cdrs are not easy to carry around in your pocket.

DC: Soul-Junk seems to change drastically in sound and genre from album to album. What does the future hold for Soul-Junk?
SLORO: Well, it is funny you should ask. Slo-ro has semi-officially left soul-junk. I will probably assist occasionally on record and live, but I am going to focus on doing a solo lp or ep (possibly dvd) as slo-ro and then quitting this whole rap game all together. Jay-Z is inspiring. Glen is still cranking out massive amounts of beats and has a few things up his sleeve, but it is still all in the developmental stages.